Cooling during exercise has a positive effect on exercise performance and capacity. Keeping your body’s core temperature down while you exercise allows you to exert yourself more, for a longer period of time, before feeling the negative effects of heat from your internal body temperature.

A 2003 study found that over the 15-minute post-exercise period during which cooling was applied to athletes, the Respiratory Exchange Ratios were lower in the athletes being cooled vs. the ones who weren’t cooled.

Conclusion: Athletes who were being cooled after exercise recovered their muscle’s oxidative capacity to regain energy faster than those who weren’t.

Polar's Recommendation for Athletes: Our Cool Comfort® Performance Vest and Neck Wrap can be activated and then frozen prior to an athletic event. The frozen garments can be transported to the event in a Polar Cooler and put on immediately after activity for immediate full body cooling.

Precooling the body during warm-ups has become a popular method of combating the debilitating effects of heat-induced fatigue and to extend the period in which an individual can tolerate a heat-gaining environment.


WHY PRECOOL?
Cooling one’s body prior to a sporting event allows you to begin activity with a lower core body temperature and therefore extends the amount of time you are able to perform at a high level before your core temperature begins to increase and your performance begins to decrease.

THE RESEARCH
Interest in precooling prior to sporting activity has increased dramatically over the past few years, but is by no means a new concept. Researchers have been studying the effects of precooling a person’s body since the late 60’s, as shown in the table below.

The majority of the studies have concluded that cooling one’s body before activity improves performance. In a 2003 study, athletes who precooled before their 5k run on a treadmill decreased their times by up to 13 seconds. 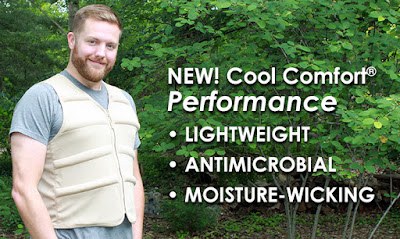 Polar’s Cool Comfort® Performance line is constructed of a lightweight, antimicrobial, high-performance fabric with superior moisture-wicking characteristics. These vests and accessories are ideal for precooling, cooling during athletic cooling or post-cooling.

Posted by Polar Products at 4:25 PM No comments:

High school football season is now in full swing with daily rigorous practices in the sweltering heat, and players loaded down with helmets and pads.
In recognition of the dangers that the heat can pose to student athletes, Lake Health announced that it has purchased 12 Polar Life Pods for each Lake County high school and college it works with. These schools include, Perry, Madison, Riverside, Painesville Harvey, Fairport, Andrews Osborne Academy, Kirtland, Eastlake North, Willoughby South, Wickliffe and Mentor, as well as Lakeland Community College.

Polar Life Pods are portable immersion systems that facilitate the rapid cooling of athletes experiencing heat exhaustion, heat stress or heat stroke. The pods resemble a hooded sleeping bag in which an athlete experiencing heat stroke can be easily zipped up in and monitored. An athlete up to 7 feet tall and 400 pounds can be accommodated inside the pod. The Polar Life Pods cost $325 each.
This system is the first of its kind, invented by an athletic trainer from Dayton. The company, Polar Products Inc., is based in Cuyahoga Falls and creates many other cooling products, such as vests and neck wraps.
“In the past, there was no product designed for this purpose. They had to adapt big 300-gallon water troughs that had to be set up ahead of time,” said William Graessle, president of Polar Products Inc. “They’re quite a ways from that reservoir and the reservoir has to be kept really cold the whole practice, which is almost impossible to do. If that water is not ice cold, it can’t cool the athlete quickly.”
The polar pods only require 30 to 60 gallons of water, which are poured in after the athlete is inside the pod. This water can be kept in the same multigallon coolers that athletes drink from.
The pods contain a flotation pillow that allow the athlete to become complete immersed, while keeping their airways clear.
“It hyperextends the neck to keep the airways up high, while still allowing the bottom half of the head and the neck to be in the ice water, very key points for cooling the body,” Graessle said.
The Polar Products Inc. team emphasizes the idea of “cool first, transport second.” Graessle explains that from the time an athlete begins to show symptoms of heat stroke, there is a 15-20 minute window to get the athletes temperature down to 102 degrees. If that can’t be done, the athlete can suffer permanent injuries.
“Brain, heart and nerve damage,” John Smith, director of sports medicine for Lake Health said. “Brain, obviously being the worst, and that’s what goes first.”

Although heat stroke is considered “exceedingly rare” — there have been 11,000 cases of heat stroke in the past 10 years, said Mike Mockbee, senior product manager at Polar Products Inc. — it is also considered 100 percent preventable.
“The only thing that we keep saying is it’s a defibrillator type situation,” Graessle said. “Remember 10 years ago, you didn’t see defibrillators everywhere. Now, they’re everywhere. You hope to never have to use it and that’s kind of the approach here.”
Smith added that these systems are easily used by anyone who has had training with the pods. If an athletic trainer is not on the scene, a coach could easily begin cooling down an athlete suffering from heat stroke.
“It’s safer for the trainers, it’s safer for the athlete and it’s more convenient that you can bring it to all the fields you need,” Mockbee said.
Article and first picture from The News-Herald website: http://www.news-herald.com/general-news/20150903/lake-health-purchases-lifesaving-products-for-area-schools
Second picture from Riverside Local Schools' website: http://www.painesville-township.k12.oh.us/protected/ArticleView.aspx?iid=533IU2&dasi=3U30
Posted by Polar Products at 10:16 AM No comments:

"By purchasing these systems, we can protect young athletes from heat-related illness," said John Smith, director of sports medicine at Lake Health.

A heat stroke is a life-threatening medical emergency that occurs when the body's capacity to dissipate heat is compromised and core temperature becomes dangerously high. Symptoms include hot and dry skin, lack of sweat, confusion, slurred speech, nausea and irrational behavior.

A heat stroke is 100 percent survivable when the affected person's temperature is brought under 102* degrees within 30 minutes of collapse.

Nearly every year there are reports of serious heat illness or sudden death in student-athletes during summer practices. Football players, outfitted with bulky pads and helmets, are especially susceptible to the effects of heat.

Polar Life Pod manufacturer Polar Products Inc. donated one system to the Lake Health Race Series and provided 12 cooling vests for athletes who are not in a heat emergency.

The company also allowed Lake Health to purchase the Polar Life Pods at a significant discount.

Research shows cold-water immersion is the most effective way to cool down athletes after strenuous activity or overexposure to the heat.

Previously, as part of Lake Health's Pools for Schools initiative, athletic trainers filled wading pools with cold water and placed them in a shady area close to the sideline. When necessary, football players could immerse themselves in the pools to cool off.

"The Polar Life Pods are an improvement over the pools we used because they are portable and can be set up quickly. Plus, they require only 30 to 60 gallons of water and enable us to fully immerse athletes up to seven feet tall and weighing up to 400 pounds," explained Smith.

According to Brian J. Juriga, co-medical director of sports medicine at Lake Health, even highly-conditioned athletes can become victims of heat stroke if they don't take special precautions when exercising in hot, humid weather.

"Heat stroke can be prevented in the first place through good policies. Athletes can protect themselves through adequate hydration, acclimatization when necessary, early practices and competitions and breathable clothing," said Dr. Juriga. "When they become overheated, cold-water immersion is lifesaving."

*Correction from article: the person's temperature must be brought down below 102 degrees, not 104 degrees.

Posted by Polar Products at 9:58 AM No comments:

Polar Products
We have over 25 years of experience manufacturing high-quality, effective and affordable personal cooling and hot & cold therapy products. We Have Solutions for Cooling Every Body!®